PM Lee To Meet Donald Trump For The 4th Time, Before The UN General Assembly

The UN Secretariat Building stands tall and robust against the clear New York sky. Before it, flags from nations around the world ripple in the wind — among them, the Singapore flag.

Prime Minister Lee Hsien Loong arrived today (22 Sep) to attend the 74th UN General Assembly’s General Debate, which will start on 24 Sep. He will also be meeting US President Donald Trump for the 4th time since Mr Trump took office 2 years ago.

The last time they met was last year, when Trump came over to Singapore for the Kim-Trump Summit. They had met 2 other times in 2017. The conversations ranged from congratulatory ones to discussing the close ties Singapore shares with the US. 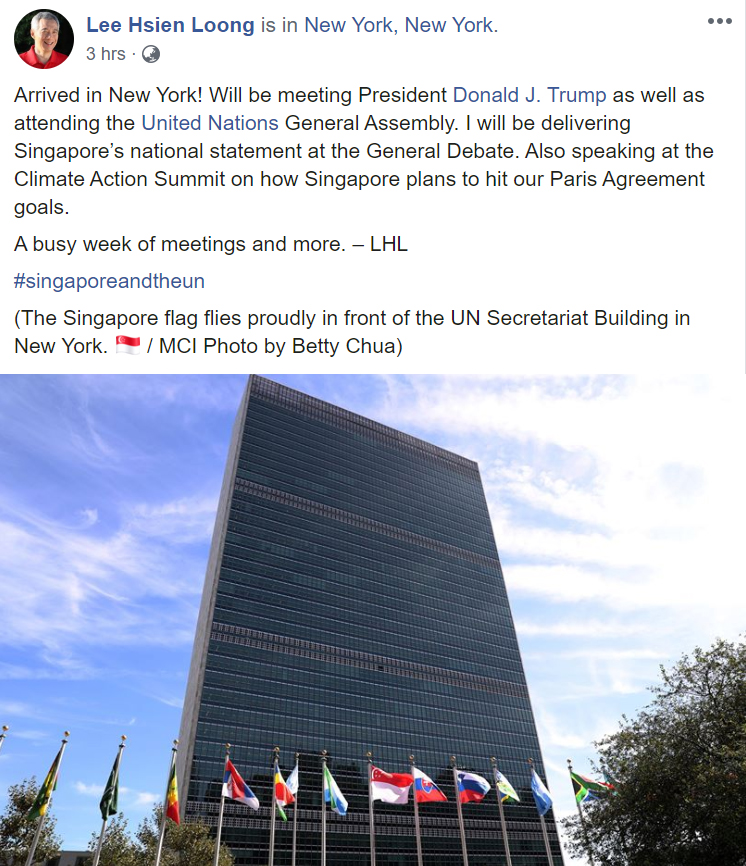 The UN General Assembly is a time for world leaders to talk about important and pressing international issues. The week-long debate will start with discussions about climate change and universal health coverage.

PM Lee will be presenting at the first meeting about the steps which Singapore will be taking to reduce its carbon footprint and contribute to environmental efforts worldwide.

This is quite timely, in light of the SG Climate Rally at Hong Lim Park yesterday (21 Sep). We’re sure the participants will be listening intently to what PM Lee has to say.

The other high-level meeting on the first day will focus on universal health coverage. This basically means that world leaders will be sharing how they intend to create or maintain a healthcare system that allows all citizens access to quality and affordable healthcare.

In Singapore, we have the long established healthcare schemes under the CPF.

Our universal health coverage is no stranger to the world. In 2014, it was ranked the most efficient in the world by a Bloomberg study.

It was also ranked second in the world, just behind Japan, for “value for money” by The Economist Intelligence Unit (EIU).

We wonder what PM Lee will talk to President Trump about before the General Assembly and the 2 meetings on climate change and healthcare — both of which Trump has shown repeatedly to disregard.

In 2018, he said of a report on the catastrophic impact unchecked climate change could have on the US economy, “I don’t believe it“. He also charged climate change scientists with having a “political agenda“.

As for universal health coverage, Trump has on more than one occasion expressed skepticism about its practicality. For example, he once tweeted this.

The Democrats are pushing for Universal HealthCare while thousands of people are marching in the UK because their U system is going broke and not working. Dems want to greatly raise taxes for really bad and non-personal medical care. No thanks!

And yet, for his vilification of such a system, he has also, strangely praised it before. That was, when he abolished Obamacare after taking presidency. He vowed “insurance for everyone“.

Singapore committed to climate change efforts with $100b

Singapore rings a very different tune when it comes to fighting climate change. At the National Day Rally 2019, PM Lee raised the topic when he said that the government will commit $100 billion over a long term to safeguard Singaporeans against the detrimental effects.

Singapore will also be making changes to encourage lower carbon emissions from all parts of the city — industrial, household, transport, etc. Perhaps PM Lee will be sharing all these with the world and showing that Singapore is doing our part in helping mitigate climate change.

All the best to PM Lee at the UN General Assembly and may the discussions be fruitful ones!