Earlier this week, Singapore Pool came under scrutiny when software errors affecting the TOTO online system excluded the number ’49’ from being selected.

But there may soon be something to cheer about, as far as TOTO is concerned.

The prize pool for Friday’s (17 Jan) jackpot is estimated to hit a whopping $9.9 million — the 7th largest TOTO prize pool since 2014.

$10 million TOTO draw will be a ‘cascading’ one

The massive prize pool is partly the result of the snowballed prize pool from previous ‘unclaimed’ draws.

Specifically, more than $4.9 million have been snowballed from the 3 previous TOTO draws on 6, 9 and 13 Jan.

That, combined with the reunion draw prize of 5 million, brought the Group 1 prize to nearly $10 million.

The 3 prior draws did not result in any Group 1 winners, so the winnings have been carried over to Friday’s (17 Jan) draw.

As there have been 3 consecutive draws without any Group 1 winners, Friday’s (17 Jan) draw will be a ‘cascading‘ one — the prize pool will be paid to the next prize group with winner(s).

The draw will take place at 9.30pm today.

If the estimated figure is anything to go by, the TOTO jackpot will be the 7th largest in one in history. 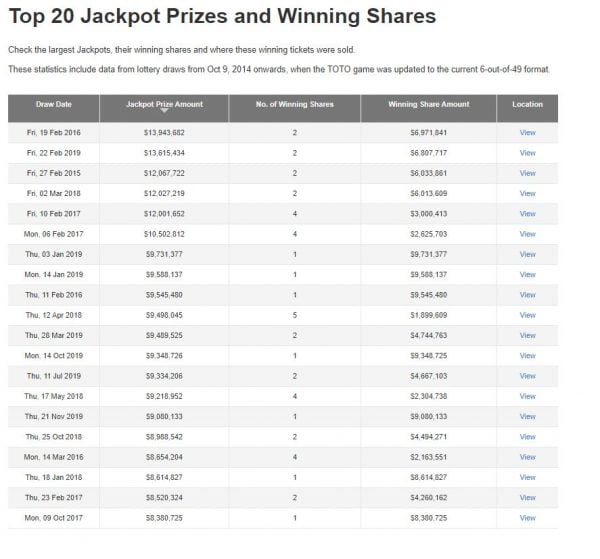 Brace yourself for snaking queues

With the massive prize pool for today’s draw, brace yourselves for snaking queues outside Singapore Pools outlets islandwide.

That said, only try your luck at authorised shops and do not resort to buying from illegal bookmakers.

You can find the full list of authorised Singapore Pools outlets here. Best of luck!

Featured image adapted from Facebook, and is for illustration purposes only.

Angsty Trans-Cab Driver Defends Himself, Claims Car In Front Was Swerving Like A Snake

The Hidden Underground World Of Singapore

E-Scooter Users Caught & Fined For Riding On Pavements On 1 Jan, PMD Ban Is In Full Effect