Audi has unveiled the new A6 e-tron four-door concept at the Auto Shanghai 2021 show.

The car sports dynamic proportions and elegant lines, as well the fastback design typical of the brand. The net result of the exterior bodyshape is a drag coefficient of just 0.22, described by Audi to be unprecedented in the electrified C-segment. The Audi A6 e-tron concept also sports large 22-inch wheels and short overhangs, while the flat cabin and the wide coupe roof arch give the vehicle proportions distinctly reminiscent of a sports car. 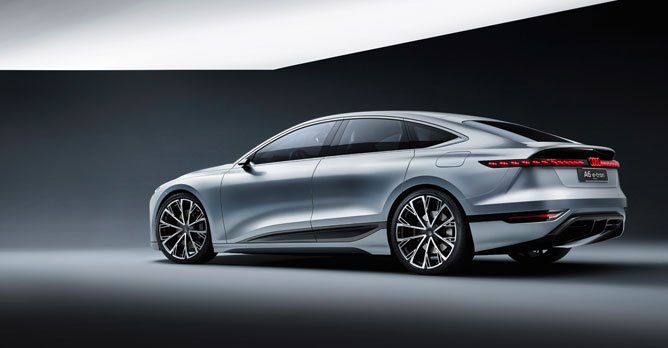 The A6 e-tron’s fastback design contributes to its low 0.22 aerodynamic drag coefficient

The absence of hard edges results in smooth transitions between convex and concave surfaces throughout the body, as well as in soft shadows.

The car’s wheel arches are also connected by the specially sculpted battery area above the rocker panel, which is highlighted with a black inlay – a design element that is now a hallmark of the Audi’s fleet of electric vehicles. Also typical of Audi e-tron models are the sleek, camera-based virtual exterior mirrors at the base of the A-pillar.

Three small, high-resolution LED projectors are built in into each side of the body, transforming the ground beneath them into a stage when the doors are opened – small extended dynamic lighting effects greet the occupants with messages in their own language. At the premiere in Shanghai, this means in Chinese characters, of course.

The small, high-resolution projectors also capable of displaying warning symbols on the ground – to warn a bike rider that the car door is about to open, for example. 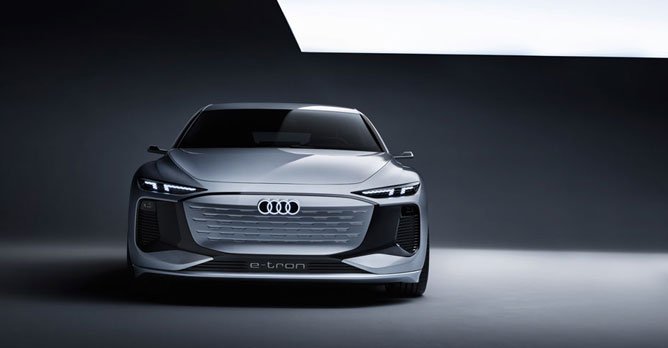 The large enclosed Singleframe grille is bordered at the bottom by deep air intakes for cooling the car’s drivetrain, battery, and brakes

Another four high-resolution LED projectors are also inconspicuously integrated into the corners of the vehicle in order to generate turn signal projections. The design of these projections can be modified to address different markets and approval regions as required.

The Audi A6 e-tron concept rests atop a new all-electric platform, which Audi calls the Premium Platform Electric (PPE). The platform is said to underpin the first Audi production cars in the C- and later also B-segment in the future.

A key element of the future PPE fleet is a battery module between the axles that holds around 100kWh of energy in the A6 e-tron concept. The battery size and wheelbase of PPE vehicles are scalable, making them suitable for use in different market segments.

On the Audi A6 e-tron concept, two electric motors are capable of delivering a total output of 469bhp and a torque of 800Nm. The front wheels of the Audi A6 e-tron concept are connected via a five-link axle specially optimised for electric vehicles, with a multi-link axle in the rear. The concept car features Audi air suspension with adaptive dampers.

The heart of the Audi A6 e-tron concept’s drive technology – and that of all future PPE models – is the 800V charging technology. Like the Audi e-tron GT before it, this ensures that the Audi A6 e-tron concept’s battery can be charged with up to 270kW in a very short time at public DC fast-charging stations. This revolutionary technology will enter the high-volume mid-range and luxury segments with the PPE for the very first time.

This technology makes charging times possible that come close to a stop to refuel a car powered by a conventional engine.  Just 10 minutes at a public DC fast charger are enough to charge the battery to a level sufficient to power the car more than 300km. And in less than 25 minutes at a public DC fast charger, you can charge the Audi A6 e-tron concept’s 100kWh battery from 5% to 80%.

Together with an expected range of more than 700km, the Audi A6 e-tron concept is uncompromisingly suitable for use as a primary vehicle. Furthermore, its range and charging speed keep pace with those of combustion engines, making it the perfect universal car for everyday needs, from short trips to the store to longer road trips when going on vacation.