Two machines that stand at the pinnacle of engineering – the Bugatti Chiron Sport and the Dassault Rafale Marine – face each other at a naval base in Landivisiau, north-west France. The high-octane rendezvous between France’s ultimate machines is a spectacle to behold.

This is the start of an extraordinary match-up: 1,480bhp up against 15,252Nm of thrust, a hyper sports car up against a Navy jet. The two high-technology products from France are at the top of their respective fields and represent the technical progress made after decades of development in automotive and aerospace engineering. 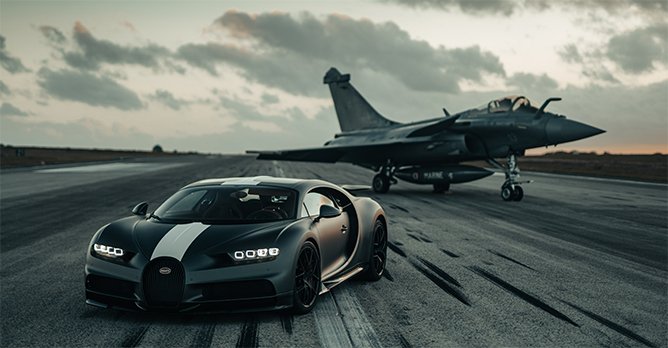 Two professionals occupy the cockpits – Bugatti’s ‘pilote officiel’ Pierre-Henri Raphanel in the Chiron Sport and frigate captain Etienne in the Rafale Marine. They and their teams have been preparing for this day for weeks. The tension leading up to the start is palpable for everyone involved.

With its outstanding performance and incredible top speed, the Bugatti Chiron Sport is almost peerless in the automotive world. A Bugatti has gone toe-to-toe with a jet before. A Veyron 16.4 took on a Eurofighter Typhoon in a drag race in 2007.

In the latest match-up, the Bugatti Chiron Sport and the Dassault Rafale Marine are seeing how they measure up against one another in disciplines like acceleration, torque, and braking capabilities. 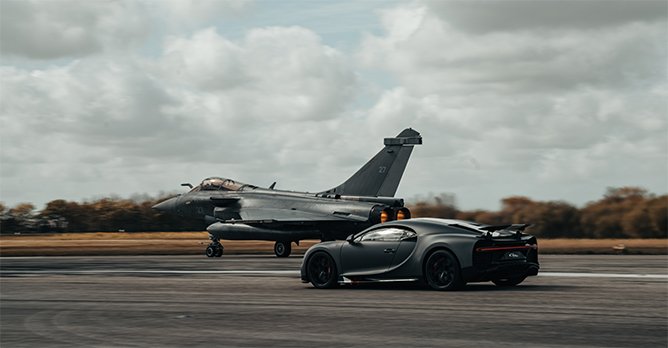 The Bugatti and fighter jet going head to head

Bugatti has held close links with the aviation world for more than a hundred years. Bugatti’s race car drivers, such as Albert Divo and Bartolomeo ‘Meo’ Costantini flew for the French Air Force at the beginning of the last century. The legendary French aviator, Roland Garros, owned a Bugatti Type 18 to be as fast on the ground as he was in the air.

It was therefore only logical for Bugatti to unveil the Chiron Sport ‘Les Legendes du Ciel’ at the end of last year, limited to just 20 units.

The model is the French marque’s way of honouring French aeronautical heritage and the Bugatti drivers who also piloted airplanes – a link between the past and the present. 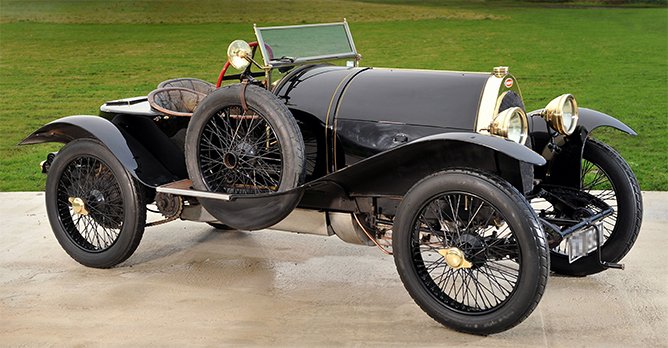 The limited edition Bugatti features attributes that pay homage to aviation, such as the Gris Serpent matte grey paintwork and the blue, white, and red Tricolour, which adorns the front of the side skirts. The bars of the radiator grille are made from laser-cut aluminium, reminiscent of planes arranged in a flyby formation.

Earth-shattering power is provided by the 8.0-litre W16 engine with 1,480bhp and 1,600Nm of torque at its disposal. A seven-speed dual-clutch transmission transfers the power to all four tyres.

Behind the steering wheel sits a man of speed and precision in the cockpit: ‘pilote officiel’ Pierre-Henri Raphanel. He took part in the 24 Hours of Le Mans 14 times between 1986 and 2000, finishing second twice, and once winning the GT category. In 1989, Raphanel qualified for the Formula One grand prix in Monaco. The race car driver has been assisting Bugatti with his expertise for more than 10 years and in 2010, he broke the speed record for road-legal hypercars in a Veyron 16.4 Super Sport, attaining a top speed of 431km/h. 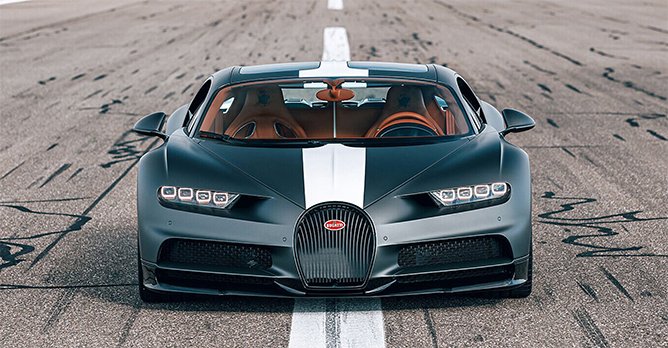 He has been test-driving for the hyper sports car manufacturer ever since. But this encounter between the Dassault Rafale Marine and the Chiron Sport is a first for him, too. “We may only be driving straight ahead on a runway but setting off alongside a jet demands a great deal of attention and concentration, especially at high speeds,” explains Raphanel.

Alongside the Chiron Sport is the Rafale Marine, the pride of French Navy aviation. After France left the Eurofighter programme, the French company Dassault developed its own aircraft; one which was uncompromisingly tailored to the requirements of the French army.

This includes the ability to be able to take off over especially short distances, thanks to its virtually tailless delta wing construction. It is light and versatile, and can be adapted to operate from aircraft carriers or traditional runways. 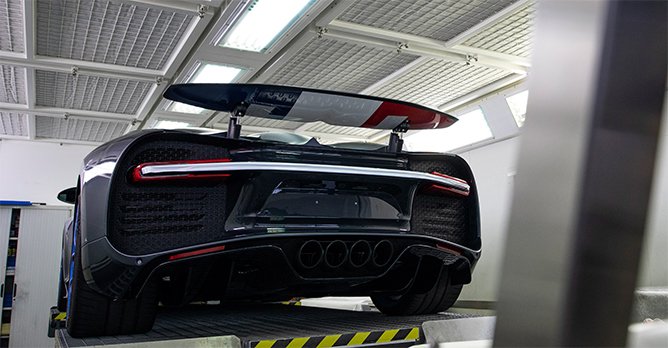 On the Chiron Sport, the rear wing is raised from an angle of three degrees to 49 degrees

The Rafale Marine – in single-seater configuration for the Navy – can achieve a top speed of more than Mach 1.6, or around 1,975km/h. Around 200 Rafale aircraft have been produced to date, 46 of which are Rafale Marine jets.

These two French icons share a surprisingly intertwined history. Ettore Bugatti founded the company in 1909, and the French army introduced naval aviators in the following year. The brakes on the Rafale were developed by Messier-Bugatti, a company that traces its lineage to Bugatti Automobiles.

Bugatti embraces aviation with its adaptive chassis, too. The Chiron is the first automobile to feature an entirely hydraulically-adaptive chassis, similar to the operation of a jet’s landing gear. The only difference is that the landing gear of the Rafale Marine is withdrawn hydraulically, while the Bugatti’s chassis adapts on the basis of various driving programmes. 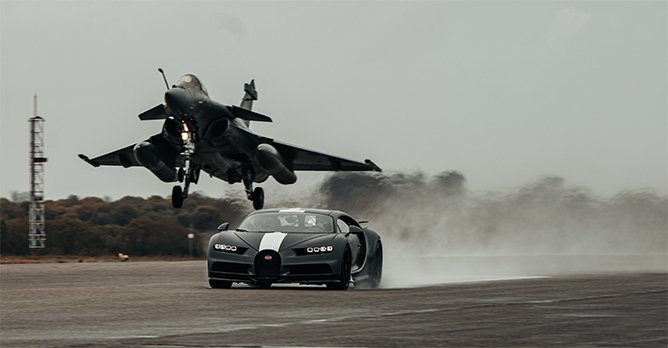 The Bugatti Chiron Sport takes the lead soon after setting off

Bugatti also draws inspiration from aviation in the development of the Chiron’s aerodynamic characteristics. Where an aircraft uses the shape of its wings to generate lift, a wing on the automobile generates downthrust for good roadholding, using the same mechanical principle to achieve the opposite effect. For the Chiron Sport, just like on a jet, the rear wing is raised from an angle of three degrees to 49 degrees in its Top Speed mode, serving as a brake flap.

Returning to the scenario at hand: The Bugatti Chiron Sport takes the lead soon after setting off. The hyper sports car accelerates from 0 to 100km/h in 2.4 seconds. It takes 13.1 seconds to hit a speed of 300km/h and 32.6 seconds to accelerate to 400km/h, a speed at which the Rafale Marine’s pilot, Etienne, hopes to match to take off.

The aircraft hits 165km/h after 150m, and takes off after 450m at around 260 km/h. “I pulled away from the Rafale over the first few hundred metres, but after a few hundred metres more it was alongside me and in the air. An incredible and fantastic sight,” says Pierre-Henri Raphanel later. He initiates his braking manoeuvre after approximately 1.5km, given the distance of the runway,  by which time the Rafale has disappeared over the horizon. 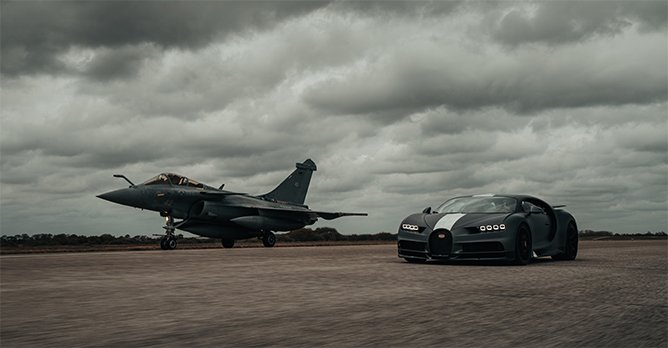 Like in ‘Top Gun’, the Rafale Marine briefly flies over the runway and alongside the Chiron

The comparison of France’s top two technical systems is therefore declared a draw – an apt conclusion, given that they share more in common than what sets them apart: In terms of technology, as well as the emotions evoked.

“Setting off alongside and so close to the Rafale Marine was an incredible experience,” explains Pierre-Henri Raphanel. To which Etienne cheekily adds, “The Chiron Sport is the ideal vehicle for navy pilots.”