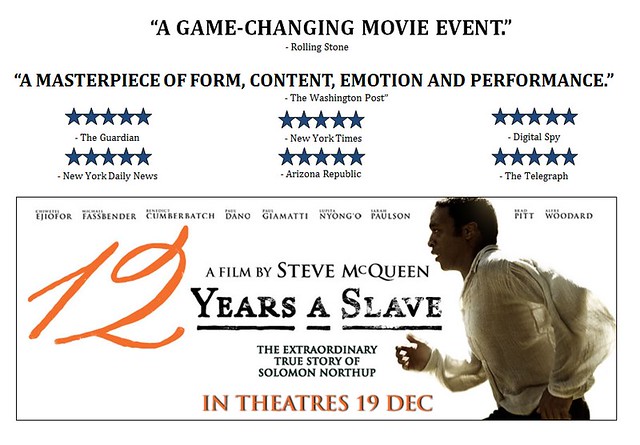 12 Years a Slave is a 2013 British-American epic historical drama film and an adaptation of the eponymous 1853 autobiography by Solomon Northup, a New York State-born free negro who was kidnapped in Washington, D.C. in 1841 and sold into slavery. He worked on plantations in the state of Louisiana for twelve years before his release.

The film will be showing in Singapore cinemas from 19 December (tomorrow). I caught the preview screening last week.

Bratt Pitt and Benedict Cumberbatch (better known as Sherlock from the Sherlock TV series) both have brief roles in the movie.

In the pre-Civil War United States, Solomon Northup (Chiwetel Ejiofor), a free black man from upstate New York, is abducted and sold into slavery. Facing cruelty (personified by a malevolent slave owner, portrayed by Michael Fassbender) as well as unexpected kindnesses, Solomon struggles not only to stay alive, but to retain his dignity. In the twelfth year of his unforgettable odyssey, Solomon’s chance meeting with a Canadian abolitionist (Brad Pitt) forever alters his life.

12 Years a Slave received universal acclaim by critics and audiences, for its acting, Steve McQueen’s direction, screenplay, production values, and its faithfulness to Solomon Northup’s account.

I am in agreement with critics that it is a very powerful movie, forcefully bringing out the evils of slavery in a subdued, everyday narrative, making it all the more real.

The story did not have a happy ending from my point of view. Yes, Northup was rescued in the end, but we know there are many others in history who didn’t and we also know slavery still exists in our modern world.

I left the theatre feeling bitter about the world we live in where a human life can be treated like nothing if one was deemed as a “property”.

I need to watch Quentin Tarentino’s Django Unchained again to indulge in a fictitious world where justice is served and slavers are punished.

12 Years A Slave is a recommended watch. It is one of the best movie I have seen in 2013. However, be prepared to deal with some really heavy themes on humanity, slavery and the importance of freedom.