The PARKROYAL COLLECTION Marina Bay is currently in the final phase of a S$45 million renovation, which completes its transformation from the former Marina Mandarin into a modern “garden in a hotel”. The works are expected to be finished by the end of May 2021.

For those who can’t wait, however, the hotel has been taking staycation guests ever since 1 December last year. And now, they’re running a four-day flash sale with 40% off room rates.

I can’t find any trace of this sale on the hotel’s offer or social media pages, but for a four-day period, rooms at the PARKROYAL COLLECTION Marina Bay are starting from S$137++ (S$162 nett) per night.

While there are some inclusions like 20% off the F&B and the spa, it’s best you think of this as a room-only rate (thankfully, it’s not the Andaz’s version of room-only…). Breakfast will cost S$36++ per person, but remember that the 20% off applies to breakfast too.

I don’t know when the four-day booking period started (I first spotted this yesterday), but from what I can see, the rate is valid for stays up till 30 June 2021 (Sun-Thu only). The S$137++ rate can be found in both April and May; in June it goes up slightly to S$155++.

Now, if you try and book this via the PARKROYAL COLLECTION Marina Bay’s website, the rate details state that it’s non-refundable and the full amount will be charged upon booking. However, scoot on over to the DISCOVER website and you’ll be able to book the same rate with refundable terms- just cancel at least 48 hours before arrival. 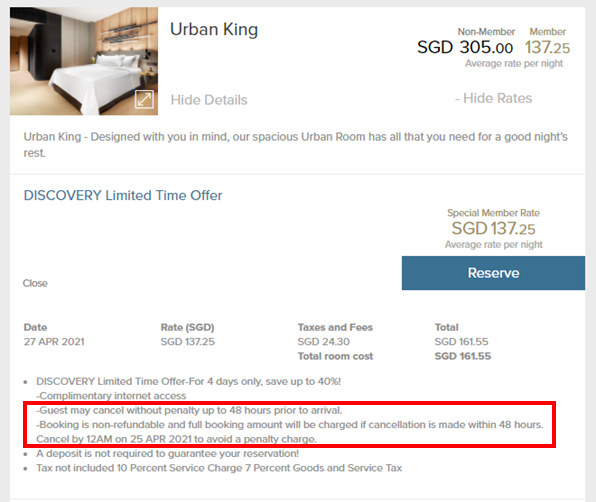 I went ahead and made a booking via this channel, careful to take screenshots just in case a dispute arose (but anyway the booking confirmation clearly states the rate is refundable, so I don’t foresee any issues).

For GHA Platinum & Black members, this is a relatively cheap way to earn an additional Local Experience award (although not the cheapest- I did see a rate of S$144 nett at the PARKROYAL on Beach Road).

If you’re hoping for the full fat experience, however, you may want to wait. As mentioned, the hotel is still undergoing renovations, and based on this report from January 2021, you can expect dust and renovation noise still.

While the hotel says that renovations will be completed by the end of May, it’s built some buffer in terms of available room categories. Up till 30 June (the latest stay date for this flash sale), the highest category that can be booked is a Signature Marina Bay room.

Suites and COLLECTION rooms (i.e rooms with club lounge access) only come online from 1 July. A GHA Black member will still get his two-category upgrade if he stays now, but there’s only so much the hotel can give if the higher categories aren’t open yet.

The pool and gym are already operational, as are its F&B concepts.

I personally haven’t been blown away by the handful of reviews I’ve read of the new-and-improved PARKROYAL Marina Bay, but I figure there’s only so much that can go wrong with a S$162 nett rate. For all you newly-minted AMEX-GHA Platinum members, it’s also a cheap way to pick up a Local Experience.

I’ve made a booking for late May, hoping that the renovations will be all but completed by then (the sale is valid for June, but I’m trying my best to avoid the school holiday period). I may cancel and rebook, however, if they launch some opening deals on club rooms.