Perhaps TAG Heuer’s most distinctive vintage chronograph, the Monaco is best known for having been worn by Steve McQueen in the 1971 film Le Mans. Having been iterated multiple times in modern times, the Monaco is making its debut in a more unusual guise.

A blend of old and new, the Monaco Titan has a sandblasted titanium case, along with a brushed silver that bearing the trademark horizontal markers of the original Monaco. 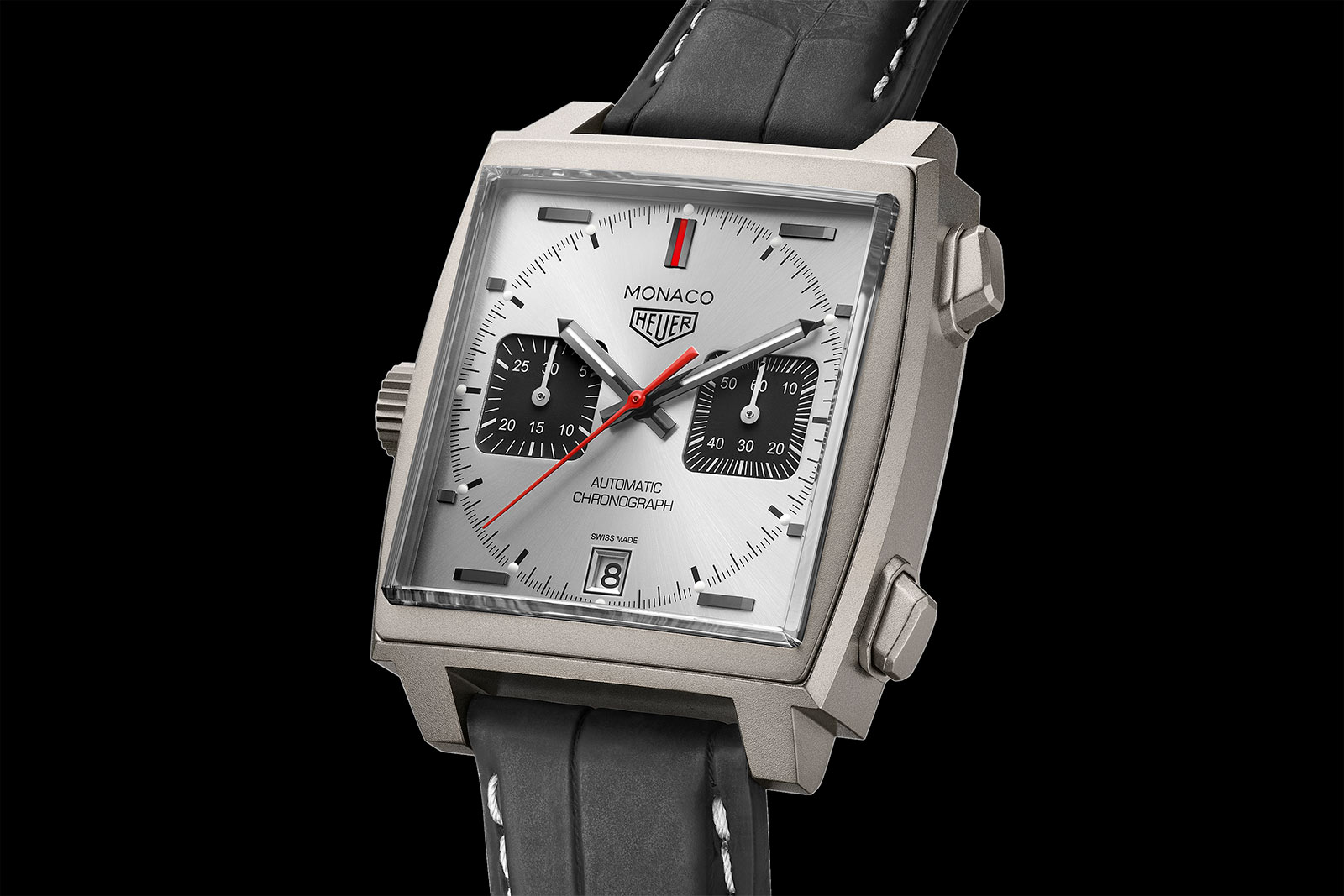 TAG Heuer has launched many Monaco editions recently, enough that I can’t recall most of them.

The Monaco Titan, however, stands out in both design and materials. Combining the style of the vintage Monaco ref. 1133B – most notably the distinctive horizontal hour markers – with modern colours, finishes, and materials, this arguably the best looking Monaco of the last couple of years. 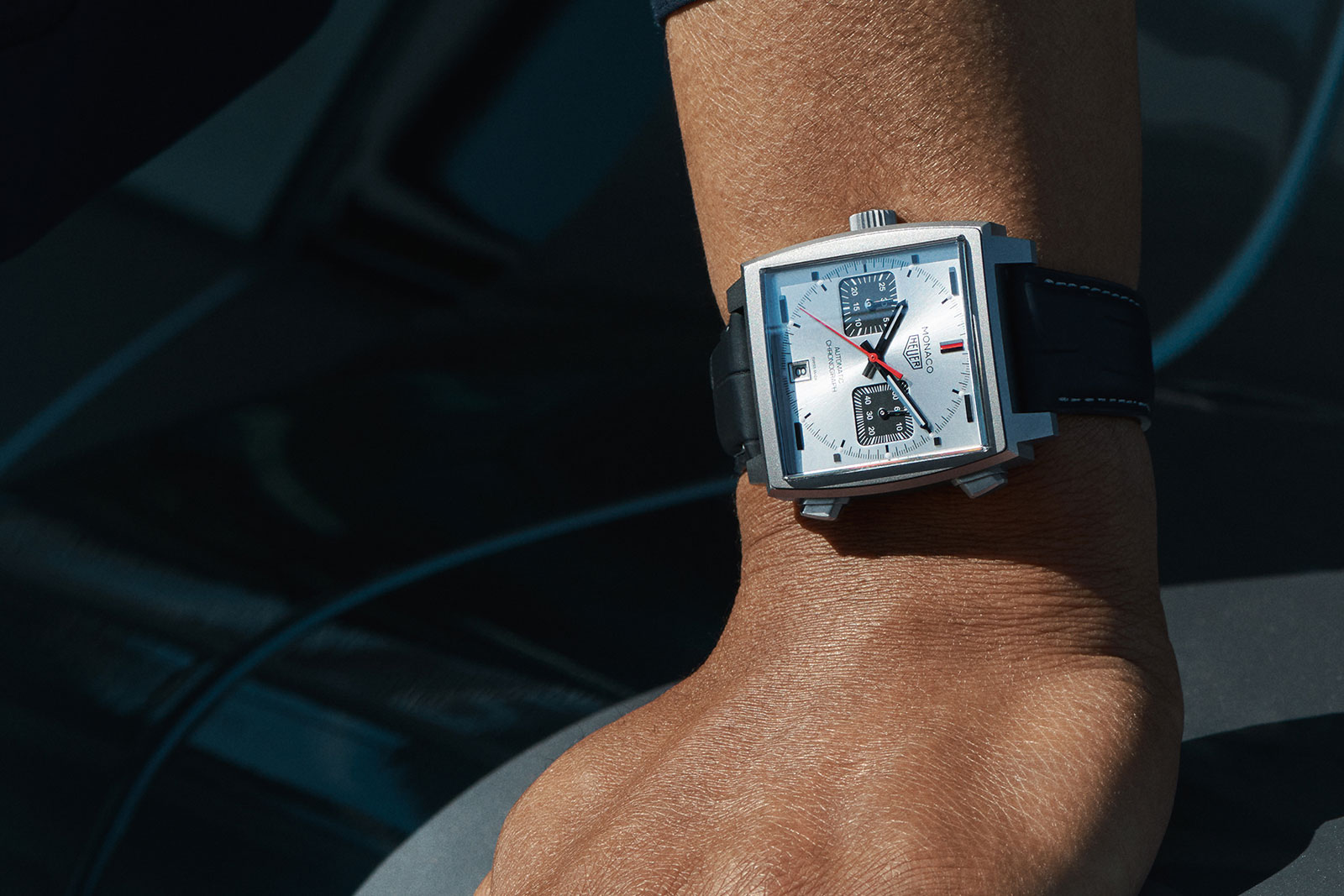 Besides the aesthetics of the material – titanium is a darker grey shade than steel – the case will be noticeably lighter in titanium, which will be useful given that the Monaco is a relatively chunky watch, despite a relatively modest diameter. 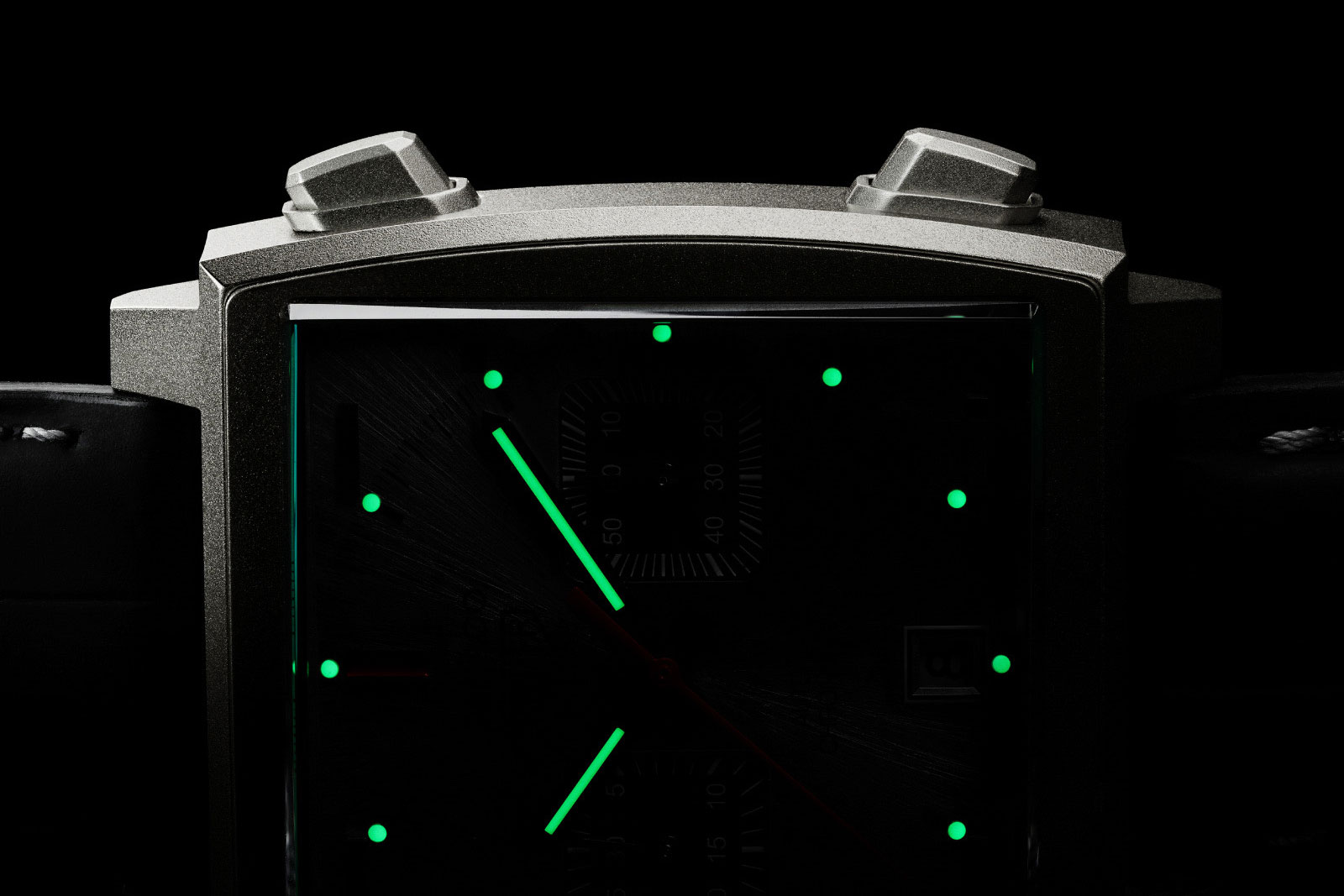 The Monaco Titan retains the classic dimensions of the model, with a case that’s 39 mm square. While nearly all modern-day Monaco have steel cases, its case is titanium that’s been sandblasted, giving it a grained surface.

It has the winding crown at nine o’clock, exactly as it was on the vintage Monaco. On the original, the unconventional crown position was a consequence of the cal. 11 Chronomatic movement inside, one of the first-ever automatic chronograph movements. 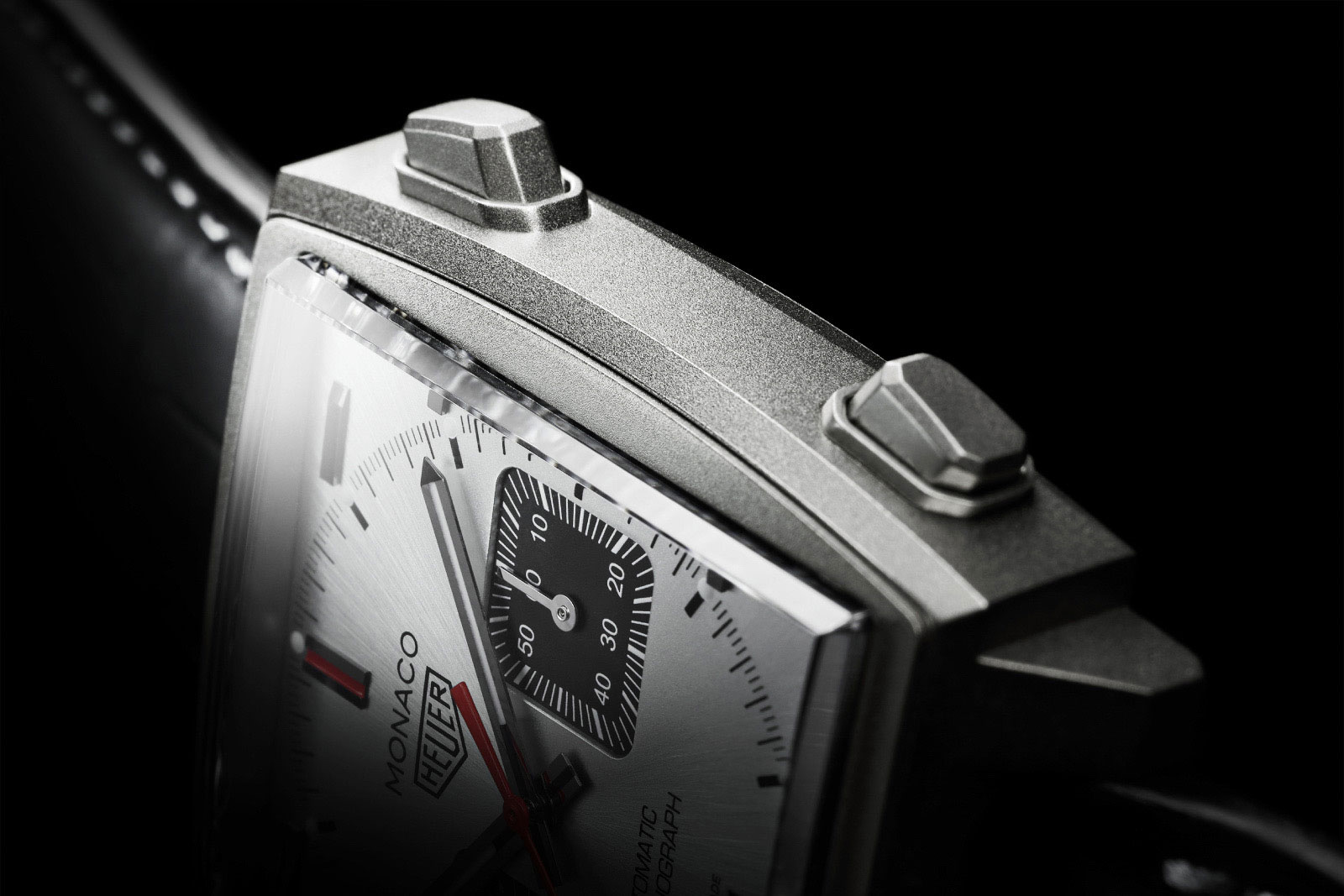 Now the Monaco relies on the Calibre 11, which is actually an ETA 2893. It’s a modular movement made up of an ETA 2892 base with the chronograph mechanism on top. Because of its modular construction, the base movement can be rotated 180 degrees to position the crown at nine o’clock, while still having the chronograph pushers in their usual positions on the right. 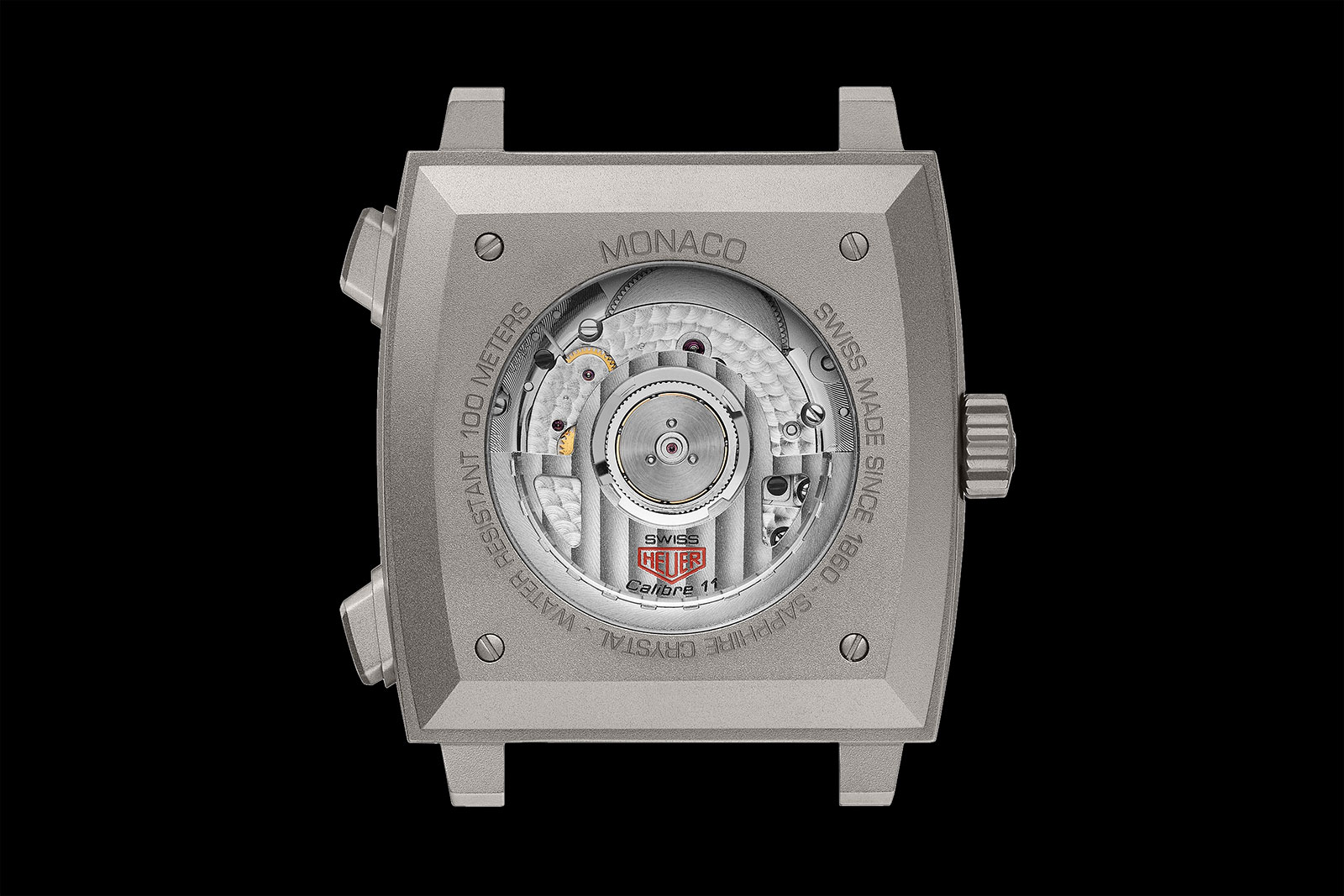 The dial is silvered, radially brushed, and matched with recessed black registers, along with a handful of red accents. More notable is its design, which sticks closely to that of the vintage original.

All elements on the dial are modelled on the original as far as feasible, even “Swiss made” above the date window (which was just “Swiss” on the original). Its distinguishing feature are the baton hour markers – with one sloped end as on the original – that are positioned horizontally, instead of radially as is convention. 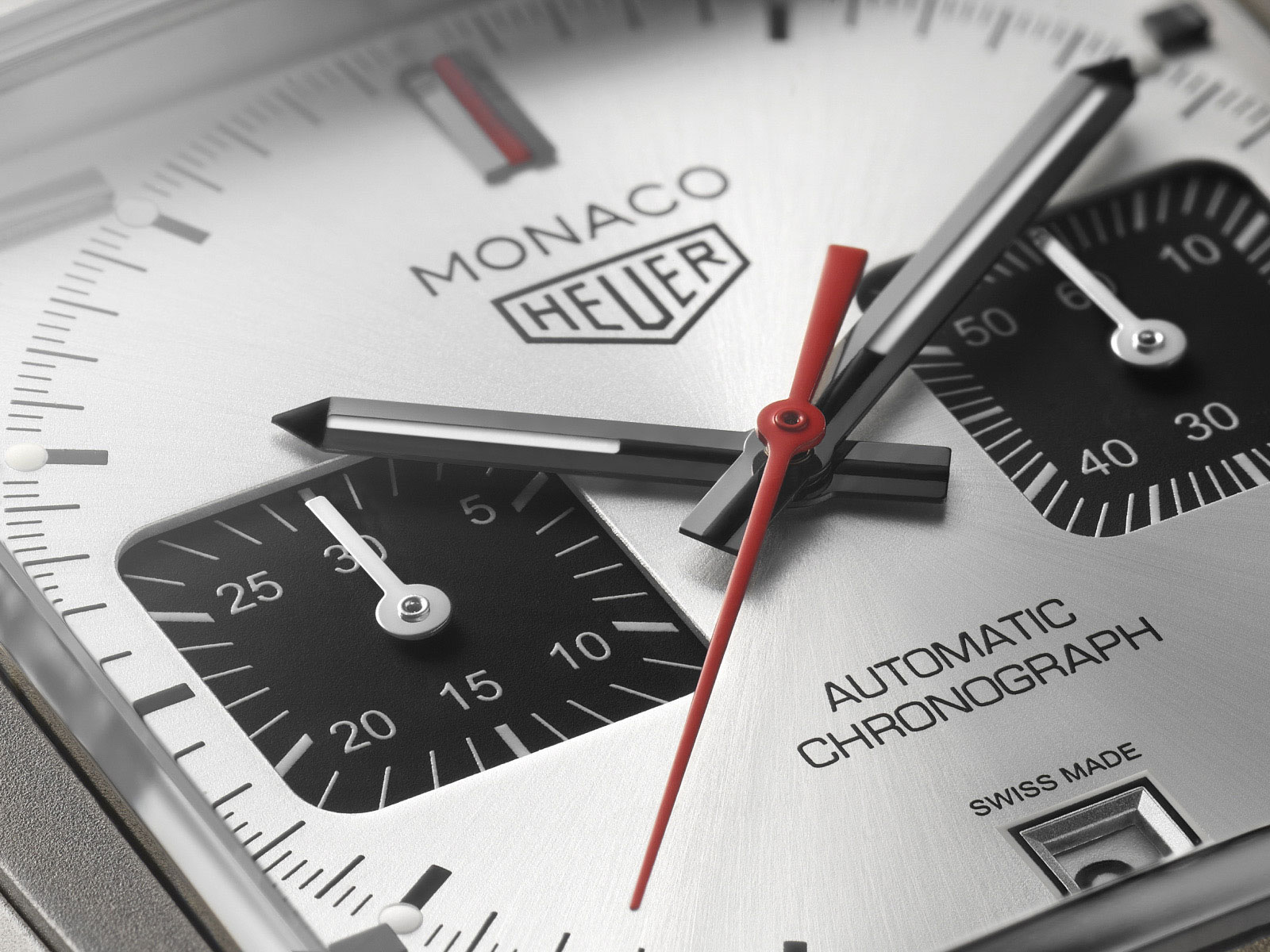